How to make peace with what IS and what COULD BE

How to Rewire Your Mind

No one ever said it was easy. In fact, those of us who have had success with it in some way will tell you it’s one of the most difficult tasks to do, but the results are astounding.

Imagine seeing your current reality from inside an alternate dimension. Everything looks the same, but it feels DIFFERENT. The perception is MORE CLEAR.

Yeah— It’s kind of like… dare I say… playing in a fantasy world.

Take yourself on a healing journey.

Identifying your personal limiting beliefs and replacing them with empowering ones just might be the single most IMPACTFUL and powerful thing you can do to improve your life.

According to the late Dr. Wayne Dyer, beloved author and spiritual leader, the trick is to open yourself up to all possibilities without being attached to the outcome.

Sounds a little tricky, doesn’t it?

In essence, you can still allow yourself to DESIRE something that you don’t have, but the power to receive it lies in your ability to be at peace with NOT HAVING IT.

Yeah. Wrap your mind around THAT one.

Anything you might FEAR will instantly lose it’s power over you once you have made PEACE with it.

We’ll be talking about the book that she co-wrote with her father, what it was like being the daughter of such a beloved leader, and how it’s been applied to her new life as a young mother.

Serena is the 6th of Wayne and Marcelene Dyer’s 8 children. She has co-authored a book Don’t Die With Your Music Still in You with her father. Serena has a masters and bachelors degree from the University of Miami and she lives in south Florida with her husband and two small children.  Learn more about Serena—> 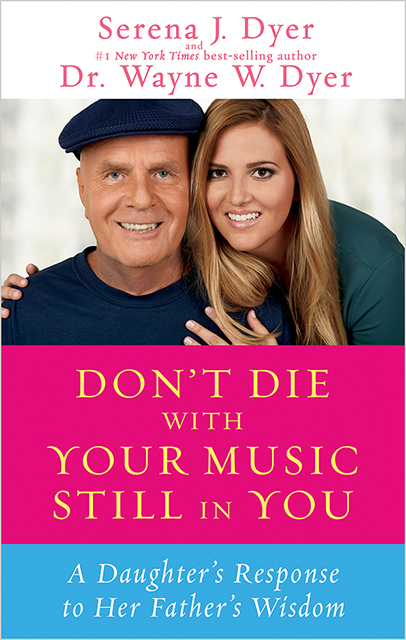 “In the book that was co-written with her father,  Don’t Die With Your Music Still In You, Serena shows us how it felt to be on the receiving end of the gift of spiritual parenting. While the other kids in the neighborhood were being taught to “fit in” and “act normal,” the Dyer children were counseled to follow their own destiny, to go within and trust their innermost voice. Serena shares her amazing story of just how this training in self-reliance guided her in her formative years. Her dad follows up with his retrospective on how each of the 10 Secrets can work to give us all a life filled with true success and real inner peace.” – Hay House, Inc.

Is your child...PSYCHIC?
Parenting your Millennial Adult-...